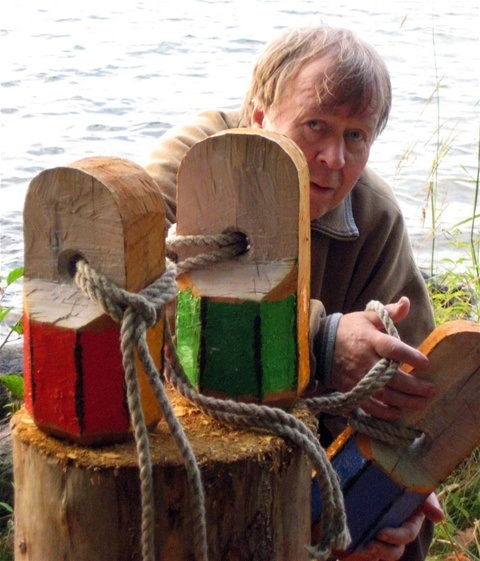 I have been creating art since I was just a boy. I went to the Free Art School, the College of Industrial Arts, and Advertising Designer College with the intention of becoming a free artist, but a full-time job in the field of advertising delayed the complete realisation of my plans for 40 years.

In 1972, I won the Best Advertisements of the Year competition, received a certificate of honour for my illustrations at the Brno biennale for application graphics, and won a poster design competition arranged by the Finnish Family Federation. I received another certificate of honour in Brno in 1976, and two years later I had the pleasure of designing a poster in celebration of the Finnish Defence Forces 60th anniversary as well as working as the visual designer of a collection called Tuulispää (‘Like the Wind’). From 1974 to 1977, I worked as a developer and illustrator of the story pages of Me Naiset women’s magazine. I represented Grafia, the Association of Professional Graphic Designers in Finland, in UNICEF’s stamp design competition in 1978–1979, and between 1962 and 1988 I also received several awards from a variety of idea competitions in the advertising field. A number of museums have my posters in their collections.

My trade union memberships have included Grafia and Graafiset Muotoilijat ry, and my two professions have also influenced my art greatly. The best thing about advertising is its insightfulness and a certain competitiveness, which encourage individuals to greater achievements, while my work as an art director at large advertising agencies has given me a wider perspective on matters.

In the 1970s, the main focus of my art was on illustrations, but since the 1980s I have concentrated only on painting. I started over, so to speak, and painted out of doors for two and a half years. During that time, I gained more depth of vision – to escape a theme-oriented approach, I began looking at the landscape as if from the air. However, the basis for all of my art is free cubism, adopted when I was quite young.

About two decades ago, masks, the circus, and Chinese horses entered my art. The themes became simpler and the meanings deeper. The theme of my Paris exhibition, tournaments, took its initial meaning from a children’s sandpit and proceeded all the way to modern politics. I do not aim to please anyone – the view must begin with the viewer. I want to make the viewer think through associations that are evoked through impressions. This is how the ‘cubist brain’ became the theme for my Sannäs exhibition, while the Kouvola Art Museum displayed ‘a circus of colours’. I believe my studies on chairs in the latter exhibition, for example, provide food for thought about the joint effect of wood and painting.

Although the Veden Voima (‘Power of Water’) exhibition in Anjalankoski displayed my art from 1987–2004, the majority of the pieces were based on my latest thoughts. The work is expressly visionary. Jäiden lähtö (‘Breaking of the Ice’), for example, examines the effect on the human mind – especially my own – of the rivers and lakes breaking free of ice in the spring. Other thought is provoked by the piece Veden Voima, which is a purely constructive abstraction. The focus of my latest work is the item I have named poikilo, which for me involves lucky thoughts of exchange.

I believe that the older one gets, the more important certain places become. For me, the most important place is Iitti, where the magnificent Kymijoki River flows past my studio. The river has given me a great deal and continues to do so. Yet, as one cannot predict the future, a painter cannot name his or her works in advance.

This is what I thought after the Anjalankoski exhibition. I had already begun a new process alongside the poikilo one, with a constructive landscape emerging from it. Ideas, as everything else in life, flow past. Only some of them come to fruition – and one has no control over which do, or in what way. A landscape is reconstructed, merging the abstract and the real, perhaps becoming a series of ascetic images carved from wood.

The multifaceted Poikilo Värivirta (‘Poikilo Colour Stream’) exhibition is based on my poem ‘Poikilo’. Carvings, paintings, photographs, and nature were combined in photographs, collages of images, and installations. Together, the pieces tell a story about log floaters’ rites with their chosen ones. Besides having had exhibitions in Kouvola, I am a member of Kouta, the Kouvola Artists’ Society.

A book on the poikilo theme, published by the Kouvola Art Museum, was accepted for New York’s MoMA Library. This was followed by an exhibition that reintroduced the theme with new paintings and carvings.

In 2008, I donated the nearly 150 pieces from the Poikilo exhibition, as well as the related extensive photographic material, to the Kouvola Art Museum, which then changed its name to Art Museum Poikilo.

I was born in Juuka, Northern Karelia, and attended school in Joensuu. Ever since I was a boy, my wish was to be an artist, and I was painting images of my surroundings already at the age of 14. Creating art has been a permanent part of my life, and also the most important one, since I was 18. After completing my national service, I moved to Helsinki, where I took up a career as an advertising designer. My wife, Pirkko, a ceramist, has tirelessly supported my work as an artist all these years. My eldest son, Mikko, is an internationally known ballet dancer, currently working as artistic director of the Boston Ballet. My other son, Antti, is an advertising photographer.